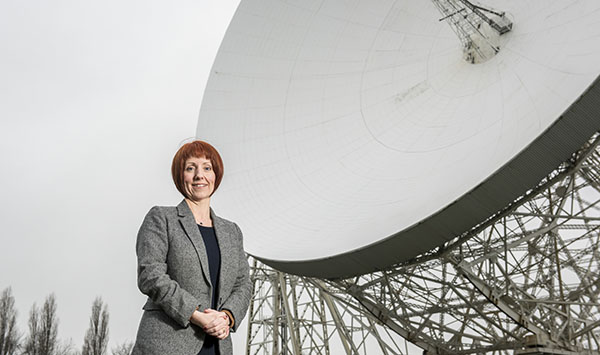 Image by University of Bath

I sat down with Science Council President, Professor Carole Mundell, ahead of International Women’s Day to get her thoughts on the current environment for women and girls in science and her hopes for the future.

The theme of this year’s International Women’s Day is #BreakTheBias. I wanted to gauge from Professor Mundell her perceptions of the biases towards women in science and how best to break them.

There is a secondary piece generated from this conversation with Professor Mundell which focuses on her own experiences as a woman in science which is available to read here.

Her full biography can be found on The President page here.

Your field of astrophysics is particularly male dominated, why do you think that is? Where do the biases and barriers start?

Astrophysics is starting to diversify more, there are subgroups where you will see a bit more of a gender balance, galaxy studies, for example, seems to be more diverse. Theoretical and computational astrophysics are still quite male dominated.

I personally think the bias comes from a physics lens and we know that certainly in the UK, it’s been quite difficult to move the dial. The Institute of Physics has done some wonderful work, but the fraction of women coming in at undergraduate level has been stuck at around 20%[i]. So, the supply up the chain is limited. Then if you are hitting some of these gender barriers further along the career pipeline, the result is very few women left at a senior level. That then gives you a negative feedback loop, few role models to create and maintain a path through for new women entering the field to follow. We really have to fix it all the way along the pipeline and not take it for granted that it’ll fix itself. Because, clearly, it hasn’t.

When you speak to young girls in school and particularly their parents, there is evidence to suggest, that children as young as six, boys and girls, believe in the stereotype that boys are naturally clever and girls have to work hard[ii]. By the age of six! Obviously, that’s wrong, and limiting, but that’s something they’ve already internalised. In parallel, the visual bias around what a physicist is, is still stubbornly that of a white male “Einstein” type. Scientists like Dr Jess Wade have been doing incredible work to try to fix this biased image by showcasing the work of world-leading women scientists by editing new Wikipedia pages, but we still have a way to go. There is also a trope that girls don’t want to do physics. I don’t agree with that. All children are naturally born physicists, we’re all enquiring about the world around us. Taken together, the unfortunate result is that these biases and unhelpful stereotypes interact together and may make parents unsure that physics is a good choice for their daughters, even if a girl loves it and is good at it. So, we have to bust the myths and, at the same time, make sure the science ecosystem is a welcoming place where women and men can thrive equally throughout their careers.

Given your experience as Chief Scientific Adviser to the Foreign Office, why do you think it’s important to have women in scientific policy or advisory positions?

I think more broadly, diverse teams are better teams. If everybody in the room looks the same and they all come from the same background and they’ve all had the same educational journey, then there’s probably a chance they’re all going to come up with the same answer to a problem and reinforce one another’s belief that it’s the right answer.  It’s possibly going to be the wrong answer and it’s certainly the wrong answer for most people. So, I think diversity is really important.

Gender is one of those first steps, if you exclude 50% of the population from your talent pool, then you’re clearly doing something wrong, and you probably aren’t going to get much other diversity either. “Where are the others?” is a great question, that Jacqueline de Rojas, President of techUK, uses to challenge a team or meeting that lacks diversity. It opens up that conversation; gives space to challenge the status quo. It can be tough to be the only woman in the room but it also opens a chink to be able to drive change, to call out engrained structural inequalities that may be unnoticed or ignored by the men in the room. We need to encourage difference, make respectful spaces to hear the voice of challenge, change the dynamic in the room. Ultimately, those diverse voices are going to be vital for tackling the big global challenges we face.

As a woman in science, do you feel it is your duty to encourage the next generation of girls into your field and across science generally?

I do feel it is. It’s more complex than just encouraging girls and saying come in. We also have to make the conditions right for them to stay and thrive. That is part of the responsibility I feel I have as a senior woman scientist. Over my career journey, I’ve had great mentors, men and women. I’ve learned a lot from junior women colleagues and, as my career has progressed, I’ve learned the importance of support networks, connecting with women in different fields, in different professions, in different countries. There are some incredible similarities in the journeys we’ve had and there are also some big differences. When we look at the scientific ecosystem, the question is what makes a really good ecosystem where the best science can be done, in the best ethical way and having the best impact for positive good in society.

We need to be encouraging young women to see there is a path for them. They will make their own path, they won’t do it the way I did it. But we need to give them the safety, the freedom, and the space to find and follow their ambitions. And then making sure those environments are physically and cognitively safe, equitable and good for them to grow their careers. Because we still have hostile workplace environments, we still have sexual harassment. None of these are conducive to attracting women in and retaining them in a way that enables them to thrive.

It’s not tokenism. You can’t say to young girls, “I need some girls in this field, so I can tick a box on gender equality”. It’s about creating the conditions, they’ll want to be there, they’ll want to stay and do well. Their talent benefits your organisation. That needs to be recognised and celebrated.

What biases and barriers do we still have to tackle to make science inclusive and diverse, especially for women?

We also have a disadvantage of hierarchy. This prejudice that the tall white man is naturally the senior person in the room or the natural leader. Dr Amy Diehl and Dr Leanne Dzubinski recently termed it the ‘Role Incredulity Gap’, when women have to spend extra time to assert or prove their role, hampering their career paths and the organisation’s effectiveness[iii].

We also have to fix our language, I’m shocked that I’m still seeing in the 21st century, male colleagues in physics saying, “women can’t do physics”, “women don’t want to do physics” or “there’s no place for women in physics”. It still shocks me that those really old-fashioned attitudes are still there and being voiced by some of the younger men. We need to reject these prejudices firmly and fix our systems and cultures. We need to professionalise and make our working environments respectful, inclusive and kinder.

How do you think people can influence the trajectory of gender equality in science?

But also, looking at your data, look at your organisation. If all your senior leaders are men, look at the data, it’s what the Athena Swan Charter has done for us[iv]. Some people think very positively of the Athena Swan Charter, some people think there needs to be more reformation of it. But the bottom line is looking at your data. That will tell you how well you’re doing.

Then you have to go and speak to individuals and hear about their experiences. Hear if they’re happy, if they’re fulfilled, see if there’s a sense of a trajectory for themselves. How that trajectory is limited, is diverted, and how that interacts with other people’s trajectories. Then you start to see if you have a systematic problem.

We need data, conversations, then systemic and sustained change.

Happy International Women’s Day! Go ask all your women what they do and what they love about what they do. What are their ambitions. Listen to them and then ask them how you can help. How you can fix the environment, to make it better for them to thrive. Then take action!

The Science Council added Equity, Diversity and Inclusion (EDI) as a core objective to it’s 2022-2025 Strategy. Read more about our EDI work here.

Our members are also doing incredible work in this space, which can be seen on their own websites.