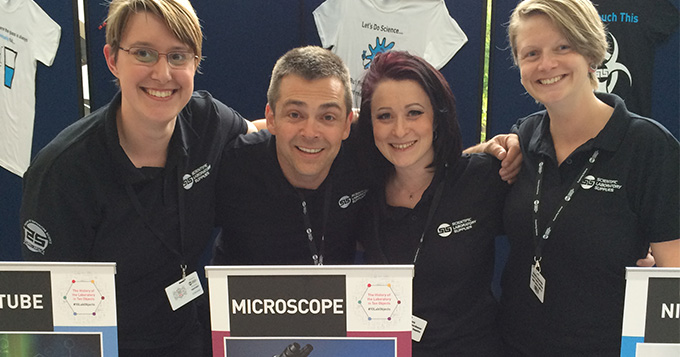 Writer and broadcaster, Vivienne Parry OBE hosted the line-up of keynote speakers who demonstrated how science is being applied to the world of Olympic coaching and in the modern restaurant kitchen. In addition to the extensive Exhibitions areas, delegates could visit a Schools’ Zone as well as professional development masterclasses run by the Science Council.

Leading up to the Show, organisers ran a campaign to chronicle the ‘History of the Laboratory in Ten Objects’. Ten nominated items made it into the Hall of Fame and conference delegates were asked to vote for the most significant lab object by dropping a token into the relevant conical flask placed on a balance. Votes for the microscope out-weighed the pipette, followed closely by the balance.

SLS Operations Director Peter Lister said: “We were delighted to have the support and interest of so many scientists, exhibitors, academics and technicians gathered together in Nottingham for what has become a firm and unique fixture in our industry calendar.”

“It has been the attendance and engagement by so many that has made the experience truly valuable for us all.”

Belinda Phipps, CEO of The Science Council added, “It was marvellous to see so many people there, interested in self-development and professional standards. We look forward to welcoming many of the attendees to our professional registers.”

The Scientific Laboratory Show & Conference was sponsored by Corning and Eppendorf, and marked the launch of the 2016 SLS Catalogue.