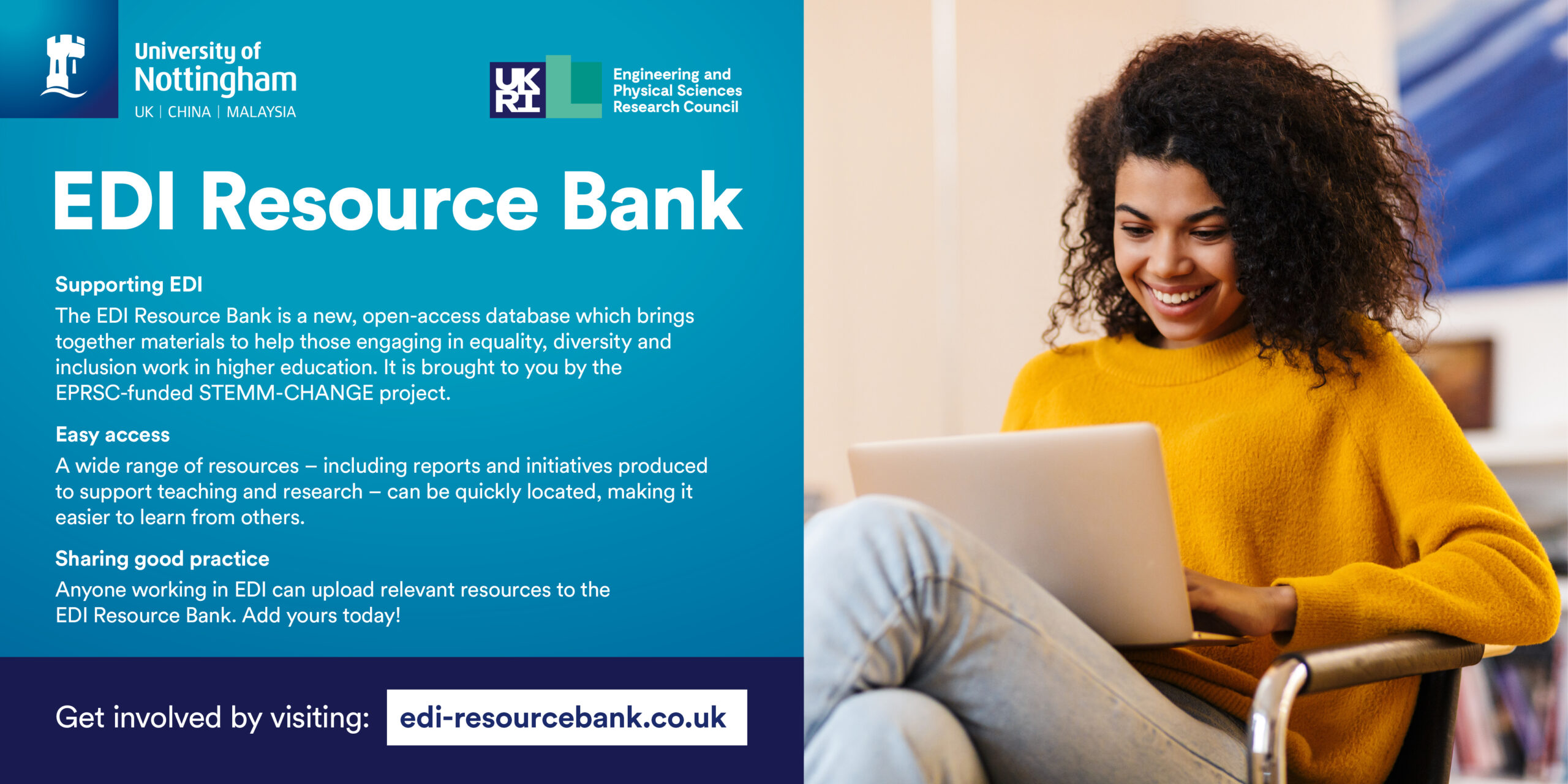 Headed by Dr. Lucy Jones, the ESPRC funded project introduces the EDI Resource Bank – a new open-access database hosted by the University of Nottingham to support those engaging in EDI in UK universities.

Higher Education institutions across the UK have seen a huge increase in work towards equality, diversity and inclusion (EDI). Initiatives such as Athena Swan and the Race Equality Charter are now widely established and conversations around transforming institutional culture are on the rise.

With a lot of good practice already published, EDI practitioners have much to learn from each other, both in terms of evidence of inequalities in university settings and the initiatives that have been developed to tackle them.

However, whilst this information is typically freely available, it’s also disparate and hard to find. STEMM CHANGE have developed the EDI Resource Bank to tackle this: a new, open-access database which brings together materials to support EDI work in a range of HE settings.

The EDI Resource Bank hosts reports and initiatives produced by institutions and organisations to support EDI in teaching and research. Through an intuitive, straightforward portal, users can locate information to aid them in planning and developing their own work towards breaking down barriers and creating more inclusive practice.

The EDI Resource Bank is designed so that anybody working in EDI can contribute to it. For example, this could include guidance on how to support students with protected characteristics, or a report on inclusive hiring practices published by a research council that they’ve found useful.

STEMM CHANGE aims for EDI Resource Bank to be used by EDI practitioners all over the UK, and for it to reflect the questions, concerns, and priorities of the EDI community itself. The University of Nottingham’s EDI Coordinator team will be moderating the Resource Bank, drawing on their expertise to ensure that submissions are appropriate before being shared more widely.

The EDI Resource Bank has been developed as part of STEMM-CHANGE, a project at the University of Nottingham funded by EPSRC Inclusion Matters. The project team have been working on several linked projects which aim to drive positive change in culture and practice across STEMM.

Dr Lucy Jones leads a strand of this project aiming to remove barriers to EDI by making good practice freely available. Though originating from a STEMM-focused project, the EDI Resource Bank contains resources relevant to work and study across all subjects and disciplines.

A call for collaboration

STEMM-CHANGE invites contributors to share resources on the EDI Resource Bank today, to build the database even further by submitting resources that you’ve developed or would recommend to others working in EDI.

If you have any questions, get in touch at: resource-bank@nottingham.ac.uk.