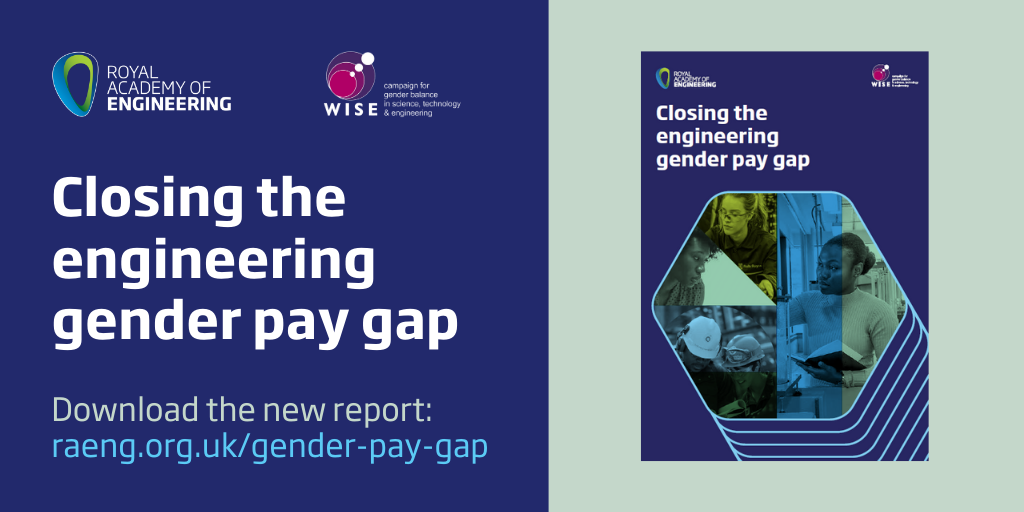 Research published today by the Royal Academy of Engineering indicates that the gender pay gap is smaller in the engineering profession than the UK employee average. The mean (10.8%) and median (11.4%) pay gap for engineers in the sample analysed is around two thirds the national average.

Although the gap is less than feared, the report finds that closing it will take concerted effort within the engineering profession.

One well-recognised issue that is contributing to the gender pay gap in engineering is the lack of women going into the profession, and while attempts have been made to address this, progress has been slow.

The report recommends actions that go beyond addressing this initial recruitment challenge to close the gender pay gap through addressing the retention and progression of women to more senior and higher paid roles.

The actions it recommends as most effective include implementing transparent pay structures and grades, reviewing promotion criteria and introducing flexible working options for senior roles.

This analysis, with data voluntarily provided by 25 engineering organisations of different sizes and from different sectors, excludes non-engineering roles to help identify issues and challenges specific to the profession. This approach differs from the mandatory gender pay gap reporting to government, which does not identify the professions of individuals in an organisation.

The report confirms that under representation of women in senior roles – rather than unequal pay – is the single largest cause of the gender pay gap for engineers.

“Reducing both gender and race inequality is key to addressing the damaging shortage of engineering skills in the UK economy. Whilst we are making some modest progress in attracting more girls and women into engineering, our research shows that there remains much to be done to achieve gender equality in engineering careers.

“The good news is that there are well proven steps that business leaders can and should take to improve how women engineers progress within their companies into more senior, more influential, more fulfilling, better rewarded roles. The best, most inclusive, businesses are doing this well, critically underpinning their business success. But others make excuses about their gender pay gap, risking losing business and talent.”

“This isn’t really about pay, and it isn’t really about women. It’s about good business. Our research found that a credible action plan to address the underlying causes of the gender pay gap helps recruit the best people, engage and motivate your employees and gives a competitive edge when bidding for contracts from public sector clients. The recommendations are relevant to engineering employers of all sizes, whether or not they have to publish a gender pay gap report.”

Explore the report, and its recommendations, in full here.