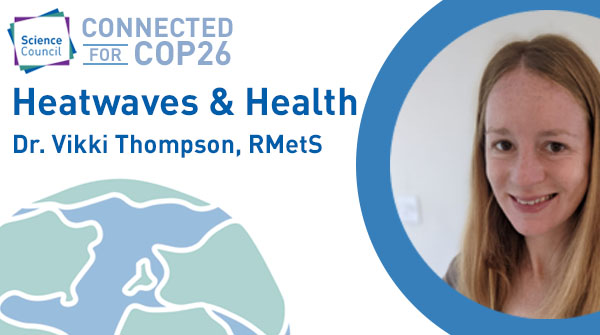 Many of us here in the UK celebrate a spell of hot weather imagining a pleasant day on the beach, eating ice cream and swimming in the sea, but exposure to prolonged heat can have devastating health impacts. In many countries, hot weather sparks images of wildfires and crop failures. In Australia, for example, public perception of heatwaves is much more negative. The climate is warming, unless governments make steep cuts to emissions, we are going to see an increase in heatwaves in the coming decades.

On 25 July 2019, the hottest day on record in the UK occurred, with Cambridge Botanic Garden reaching 38.7°C. In August 2020 34°C was exceeded in the UK for 6 consecutive days, with 5 nights where temperatures locally remained above 20°C. This summer Northern Ireland experienced its hottest day on record with 31.4°C recorded in Armagh on July 26th – the third time that record had been broken so far this year. As well as increasing in magnitude, warm spells during the UK summer have more than doubled in length since 1960. As temperature records continue to be regularly broken the impact of heat on our health will increasingly be an issue.

In England, during 2020 there were 3 heatwaves, as defined by Public Health England (PHE). PHE define a heatwave as days when either a Level 3 Heat Health Alert (HHA) has been issued or when the Central England Temperature (CET) is greater than 20°C, or both. These were spread across the summer: 23 to 27 June; 30 July to 1 August; and 5 to 15 August. The three heatwaves led to an estimated total excess mortality of 2,556 across England. About 90% of these excess deaths were in the 65+ years group.

Hot weather leads to extra strain on the heart and lungs – the excess mortality caused by heatwaves is mostly due to respiratory and cardiovascular problems. The greatest risk is to older people, those with pre-existing health conditions, and the very young. Many people, particularly in the UK, underestimate the impacts of prolonged heat exposure. Simple measures such as keeping well hydrated and opening windows can help reduce the impacts.

There is also the large ecological impact of heatwaves. Long periods of hot weather can lead to scorching fields, leading to a reduction of suitable habitats for many wildlife. Hot conditions cause an increase in algal blooms on inland lakes, producing a reduction in oxygen in the water. Species adapt to the climatological conditions in which they live, so any variation from that can have devastating impacts. In the UK frogs and toads are particularly susceptible to hot weather but are crucial to maintaining healthy ecosystems.

Heatwaves can also affect the country’s infrastructure. Heat can damage road surfaces and lead to speed restrictions on rail lines as was seen in 2006 when the west coastline had many delays and cancellations. It can lead to an increase in wildfires putting a strain on the fire services, as occurred on Arthur’s Seat in Edinburgh in 2019 and 2020. The heatwave of 1976 led to widespread water rationing as domestic water supplies were affected.

The climate is warming. The UK Met Office climate projections suggest that by the 2050’s the hot summer of 2018 is likely to occur every other year. The climate projections suggest that by the end of the century the UK could experience temperatures 40 °C every 3 to 4 years. With climate change when the weather conditions generate a heatwave, that heatwave is hotter and lasts longer than it would have been previously. Climate change may make these weather conditions more likely. Understanding the health implications of these changing climatic conditions will help us adapt as a society to help reduce the impact of heat on our health.

Read the rest of the blog series here.

About the author: Gemma Ralton