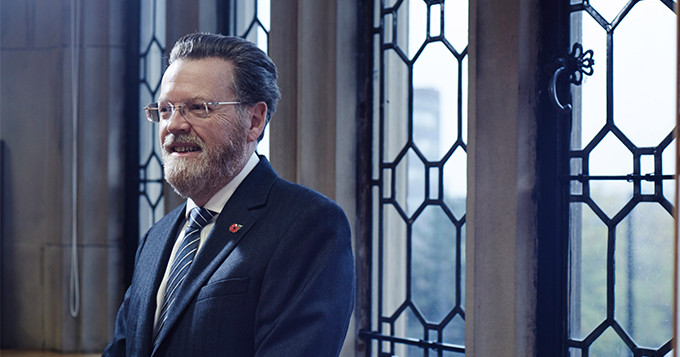 By Professor Sir Keith Burnett FRS, President of the Science Council and Vice Chancellor of The University of Sheffield

Last week I had the pleasure of addressing the Annual General Meeting of the Science Council for the first time.

The venue was historic and auspicious; the library at the Royal Society of Chemistry in Burlington House, a learned society which was formed in 1980 from the amalgamation of the Chemical Society, the Royal Institute of Chemistry, the Faraday Society and the Society for Analytical Chemistry, with a new Royal Charter and the dual role of learned society and professional body. Just across the way is the home of the Royal Astronomical Society, which received its Royal Charter in 1831 and which now has over 3,000 members, a third of them outside the UK. Both of these wonderful organisations are members of the Science Council. My own learned society was also represented at the meeting. The Institute of Physics was formed from a merger of the Physical Society, founded in 1874, and the Institute of Physics.

So given the existence of such wonderful societies and professional associations dedicated to supporting scientists and ongoing development, why you might ask do we need a Science Council? Why does it matter?

When I addressed the AGM, I tried to answer these questions; why I was pleased to take up the role of President of the Science Council and why I believe our work together is crucially important for the United Kingdom.

My answer is, as so often the case, both wide ranging and deeply personal.

Taking on the role of President of the Science Council

The Science Council was founded by my fellow scientist, Professor Sir Gareth Roberts. Gareth was an informal mentor to me at various points during my career. I remember with particular affection our last private discussions together in the grounds of Wolfson College in Oxford. It was he who encouraged me to apply for his old job of Vice-Chancellor in Sheffield, a University he loved dearly.

As a scientist who had worked closely with industry, he had a very broad view of what Science meant to the nation. Which brings me to the Science Council.

When asked if I would stand for election as President, I felt that I was, once again, following in Gareth’s footsteps. I knew that he was convinced of the need for a UK Science Council which brought together scientists working across disciplines and at all levels in industry as well as academia. And Gareth was right.

Supporting the professional development of technicians

The UK faces, has always faced, a significant problem in how we think about Science as a whole. We have often drawn a false distinction between the people who serve the science and technology mission of our country. We too easily use labels that demean the wide range of roles that a modern science establishment needs. This was a lesson first taught to me by my father, Roy Burnett. He served as the Head of the Rhondda Training Group and he told me just how dangerous it was to separate the mind from the hand. He was also right.

Which is at least partly why I have been dedicated to the promotion of technical staff in Universities for many years now. As the Chair of an organisation called HEaTED, I have worked hard with the support of people like Lord Sainsbury and the Gatsby Foundation – who are also longstanding backers of the work of the Science Council – to develop proper professional support and recognition for the technicians who are so fundamental to our science in Universities but also in industry and government work.

Why this matters is obvious to many of us as scientists. As a physicist I am under no illusion that much of the great science undertaken in my field has been made possible because of the extraordinary work by expert scientific technicians who have allowed us to look into the beginnings of the universe at CERN or develop extraordinary materials for quantum computing. The same is true for almost any field of science you care to mention, and finding a way to support and honour the professional development of such specialist scientists is long overdue.

The Science Council has other crucial roles to play too.

In times where resources are scarce, having a commitment to the highest standards for continuing professional development is a great thing to do. Many learned societies have this well in hand and they work closely with academic departments and young graduates, but there are many young scientists I know who will welcome the help that the Science Council can give, particularly in its dialogue with employers or government agencies or if they are working in areas which cut across disciplines.

An established scientist in a research-led university with a string of internationally-peer reviewed publications to their name may feel they have nothing to prove. But this is not the working experience of a far greater number of scientists working within companies or for government agencies.

Being able to show that you are registered as a Chartered Scientist can help you secure and then do your job. We heard from a number of such scientists at the AGM and it was powerful to know just what a difference this can make; the encouragement to reach for the highest standards of scientific practice.

So I am grateful that the programme of upgrading licence standards and quality assurance is underway. The Science Council will keep building close relationships with employers and government. We know it matters that science has a strong voice in these places, and the Council has a role to play to support those who undertake scientific careers in these crucial environments.

But there is one more arena in which the Science Council has a role to play, if certainly not all the answers.

What should a lay person should expect from someone who says they are a scientist? I hope the world does not hear a version of those immortal words “Back off man I’m a scientist!” as uttered by Venkman in the original Ghostbusters movie, but at times it may feel that way.

We cannot expect to remove from public discourse suspicion about independence from funders or other questions of ethics, but we can continue to point to ongoing training and professional ethos. I am not claiming for a moment that the Science Council can take on this challenge alone. As a Fellow of the Royal Society and of the Institute of Physics, I know just how hard others are working on this. But I do believe now is the time we must, as a profession, speak together.

This is not about replacing the role of existing bodies but supporting them, and helping a broad range of young scientists demonstrate their professional standing. The Science Council must not hamper these efforts, but complement them. Getting that balance right is not easy. I know that in some respects we are still finding our way, but the goal is a worthy one and I’m determined to work with all my colleagues to address our common challenges in ways which work for all.

I know the contribution scientists of all kinds and in many contexts can and do make to our country and the world. I am honoured to serve as the new President of the Science Council and to work with my peers on the challenges which lie ahead.